About the UN Plan of Action to Safeguard Religious Sites

Read the Plan of Action
How to Get Involved

In March 2019, following the attacks against mosques in Christchurch, New Zealand, the UN Secretary-General requested the High Representative for the UN Alliance of Civilizations, Mr. Miguel Angel Moratinos, to elaborate a Plan of Action to safeguard religious sites.

The Plan, which was developed in the context of an inclusive consultative process involving all relevant stakeholders, was officially launched by the UN Secretary-General on 12 September in New York. It is meant to provide a result-oriented framework for action with recommendations to help prevent possible attacks against religious sites and enhance preparedness and response.

The Plan is anchored in the following principles:

for all peoples, regardless of their faith, culture and history.


to build bridges of mutual understanding and cooperation.


to accept and respect the differences among human beings.

as a tool to better communicate and engage with one another.


to support and share compassion for one another, particularly in times of sorrow or trouble.


as one to respond with unity to attempts to divide us.


as one to ensure that unity in response to attacks against religious sites is sustained and reinforced overtime.

The Plan contains a framework for action with recommendations for Member States, religious leaders, civil society, media to better prevent, prepare and respond to attacks on religious sites. 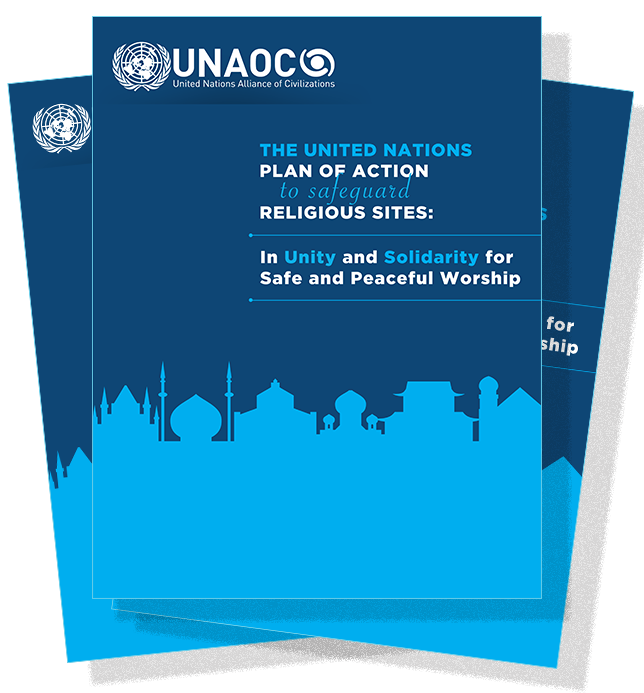 I believe in a world where hope surpasses fear. I am part of a global community that is inclusive of all people, regardless or religions or beliefs. I believe that religious sites are symbols of our shared humanity, history, and traditions. I commit to standing up and speaking out against violence against worshippers and religious sites, and to contributing to the safeguard of religious sites. I stand #forSafeWorship.

Thank you for taking the pledge #forSafeWorship.